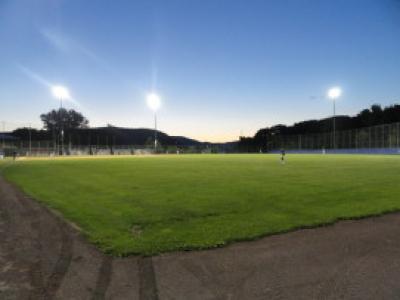 Peekskill, NY -  The participants of the 2014 WRWBL Home Run Derby have been selected!  The contest will start promptly at 10:15 am this Sunday, August 17th, and will be followed by the All Star Game at 12 pm.  Each team will have a player compete in the derby, which will consist of two rounds.  Round 1 will have each hitter having 10 outs to hit a ball out of the park.  The top three hitters will advance to the final round, also with 10 outs each. Shots off the high fence in Peekskill will count as one point, and home runs over the fence will count as 2 points.

Returning to defend his crown is 2013 WRWBL Home Run Derby champ Mike Filice from the Somers Cyclones.  Also among the players chosen are New York Bears star shortstop Danny Collins, who set a league record with 54 hits while blasting 4 home runs.  Outlaws center fielder Brandon Mann (4 home runs), the 2011 and 2013 WRWBL MVP, will be representing the Outlaws.  League champion Harrison Patriots will be sending their Finals Co MVP Chris Nardozzi into the event.  Nardozzi had 2 home runs during the regular season, and then came through with 3 more clutch home runs during the postseason.  Sweet swinging first baseman Lou Gigante from the Tigers, who also crushed 4 homers during the regular season, will be looking to take the derby crown this year.  Rookie sensation Stephen Hill from the Tides will also take part in the event.  The shortstop hit .363 this season with a pair of home runs for the Tides.  From the NYC Thunderdogs, first baseman Max Hegedus will be entering his first WRWBL derby.  Max was tied for second in the league with 25 RBI's, and ripped 13 doubles this season.  Louis Miceli, a second team all league selection, will be representing the Dirtbags.  Slugging third baseman John Kukura blasted 3 home runs during the regular season and will be representing the Rockland Cavaliers.  Players are advised to be ready on the field by 10 am for the event to start promptly at 10:15 am.  See you on Sunday!